Notes from the Field

“Just move your hips like you’re in the club!” This was the first silly metaphor from Heart of Oregon Corps’ 1st Annual River Trip, describing the paddling motion needed to propel the raft forward.  We all stood in a circle, ten youth and three staff, as we listened to Alex explain safety methods on the river, such as keeping feet up and floating on your back if you fall out of the raft or kayak. As we picked our floaty of choice, it was surprising to see two of the most nervous youth, Chelsea and Tyler, climb into inflatable kayaks, where they would be solely in charge of their own safety. 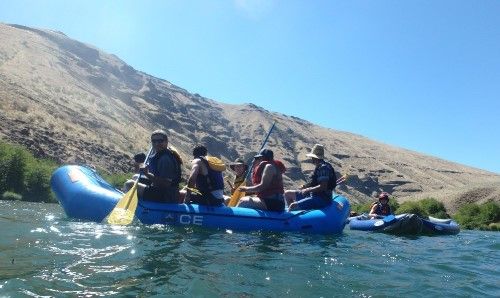 We floated for five glorious hours, starting our trip north toward the Washington border and drainage point of the Deschutes into the Columbia River, feeling like the only people on earth. The sun was bright overhead, hawks floated through the light breeze, and the rocky hills rose above on either side. The goal was to float to our first campground and get to work, of course, but as we slowly learned the paddling rhythm with uncoordinated strokes, none of us were thinking about the trail cleanup that would soon begin.  Water wars ensued. Alex noted that he never started a war he knew he would lose, speaking softly to the kayaker creeping up behind the 10-person raft.

After a lunch prepared by our river guides from Cascadia Expeditions, we hiked up a steep hill in the 100 degree heat and hated our lives. Our job involved cleaning rocks and debris from a trail winding along the steep edge of the hill that hugged the river. The trail originated from railroad construction in 1908, when the Deschutes Railroad and the Oregon Trunk Railway raced to build two lines from the mouth of the Deschutes River across Central Oregon. The Oregon Trunk Railway still runs today, whereas the Deschutes Railroad is but a skeleton left behind from multiple legal disputes and railroad workers blowing up competition supplies. We were only able to admire the disabled railroad for an hour, as the day was so hot. We hiked down, our legs like lead until we saw the water sparkling below. Nothing motivates young people like the refreshing flow of clear water on a sunny summer day! 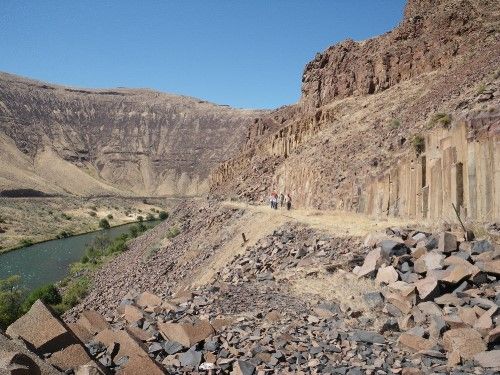 We cleaned miles of trail the next morning, accompanied by two sleeping rattle snakes, deer running along the river below, full water bottles, and much valued shade. It was difficult work, sometimes requiring youth to work together to move 100 pound boulders to the side of the trail. Our second day on the river, after five hours of labor throwing boulders off the trail, was a quick but refreshing float. Two of our youth, Josh and Marco, flipped the kayaks in one powerful rapid and could be seen bobbing along the river in their lifejackets. We pulled them into the raft as soon as we could, with Marco squinting in confusion after his eyeglasses went floating down the river without him.

We camped in a beautiful clutch of trees right next to the river, a peaceful and private place. Brett, our tour guide, created a makeshift waterslide while we napped. What a nice surprise to wake up to! Brett strapped all four kayaks together, one above the other, and laid the raft on top, upside down for a smooth surface. As each slider jumped, Alex splashed a bucket of water under them before they made contact with the slide. What fun! 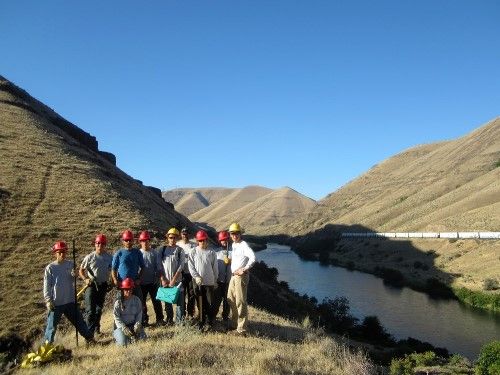 After breakfast on our third day, we did a detailed sweep for “micro-trash” in the campground, lining up and walking together to cover as much ground as we could. We found orange peels, glinting pieces of foil, and many, many pistachio shells. Then, all aboard the rafts as we began the final leg of our journey. Only Stephen, our crew leader, was allowed to kayak that last day because of the dangerous levels of the rapids. And boy, were they fun! Up and down, side to side, we were all over the place. Thankfully, no one fell overboard. As we concluded our wonderful trip, we looked up to see the mouth of the Columbia River, followed by a pelican and a few seagulls.  After floating 31 miles, the youth were mournful that our three day trip was finished, and excited at the prospect of future bonding moments between Heart of Oregon Corps and the Deschutes River.